I served as executive producer or videographer/editor on the following videos. In 2011, I received multiple CASE District I Gold Awards and Telly Awards for this work. All of the politics videos listed on this page were done over the course of three days when Saint Anselm College hosted the June 2011 CNN Republican Presidential Debate.

The #AskaWildcat project was part of a spring yield project at Davidson College during March-April 2016. Newly admitted students had an opportunity to ask current students a variety of questions about student life at Davidson. The answers from current students were included in short videos and write-ups with additional links to websites featuring content relevant to admitted students' questions. Videos for the project were shot with iPhones. The project was promoted heavily on social media, with questions solicited directly through Twitter, SnapChat, and email. Completed videos were shared directly with students on social media. 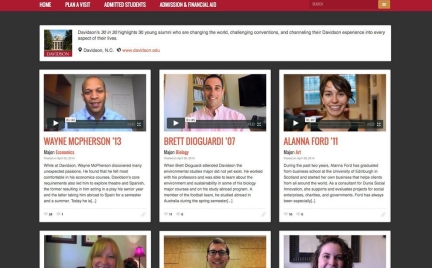 The 30 in 30 project was a Davidson College recruitment campaign targeting admitted students in April 2014. It features Skype video interviews 1-2 minutes in length, and short, easy to scan, written stories about each alumnus/a profiled. All alumni chosen for the project graduated in the last 10 years. We chose to highlight the career and post-graduate experiences of young alumni since their experience are most relevant to admitted students and their parents. The project and website received an Award of Excellence from the Council for the Advancement and Support of Education (CASE) District III Award in the Recruitment Website or Microsite category.

Saint Anselm College students reflect on their experience studying tropical biology in Belize in two of the most species-rich ecosystems on the planet — the neo-tropical rainforest and coral reef.

Every four years presidential candidates, journalists, pundits, and scholars come to Saint Anselm College as part of New Hampshire's first-in-the-nation primary. This video includes professional- and student-shot footage captured during the coverage of various events and debates on campus from 2006-2008. Students participated in staff-led training to gather photo, audio, and video footage that could be used in blogs during the months leading up to the New Hampshire Primary and in this video.

An interview with John Oliver, a correspondent for Comedy Central's The Daily Show With John Stewart from the CNN media filing center during the New Hampshire Republican Presidential Debate held at Saint Anselm College. See the final story I wrote—and the video John Oliver produced for the The Daily Show—on the Saint Anselm Blog

Calm in the Middle of the Storm

Students who worked for CNN as runners give some insight into their experience and the whirlwind that is involved with staging a nationally televised debate.

Shaking Hands With Your Future

A student discusses his experience during the New Hampshire Republican Presidential Debate at Saint Anselm College.

Joshua Rubin, producer on the CNN Election Express, provides an inside look at CNN's mobile news bureau. The bus found a home on the Saint Anselm College quad in the week leading up to the June 13, 2011 New Hampshire Republican Presidential Debate at the college. Shot with an inexpensive Kodak Zi8 HD camera and wireless handheld mic. Edited with iMovie.

This video highlights a Vietnam study tour offered during January 2011 with participants from Saint Anselm College and Williams College. Eighteen students participated in the course that included visits to historical sites related to Vietnam’s war with the U.S. and the country's history outside of the American War — its imperial past, the period of French colonialism, and Vietnamese history since unification.

Business and Culture in China

Saint Anselm College students in the Business and Culture in China course were exposed to the fastest growing economy in the world. Students spent time in China's three most important commercial, cultural, and government cities -- Hong Kong, Shanghai, and Beijing -- visiting major multinational corporations, and participating in cultural activities and lectures from Chinese University business faculty.

Students reflect on their experience during a China study tour. Students talk about the rapid growth of China and how business can bring countries closer together.

Making connections between people and cultures, students visit Vietnam during a January 2011 study tour and reflect on their experience.

Alice McAvoy is a 2010 graduate of Saint Anselm College. After graduation, she decided she wanted to explore the world and chose to work in Shanghai, China teaching English to kindergarten students through the Council on International Educational Exchange (CIEE). Alice looks back at her experience at Saint Anselm College and how it prepared her for teaching in China.

Brian Penney, Ph.D. is a marine ecologist and professor of biology at Saint Anselm College. In this video he discusses the importance of a liberal arts education to the sciences, specifically the foundation it provides for critical thinking and understanding the natural world around us.