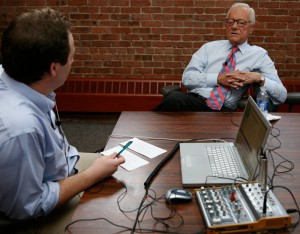 I had a unique opportunity today to interview one of the nation’s premier political journalists, Face the Nation moderator Bob Schieffer. To be in the same room to see Schieffer work is one thing, but to be able to sit down and interview him for 20 minutes is a once in a lifetime opportunity.

With a career that spans 50 years, Schieffer is CBS News’ chief Washington correspondent and he has covered all four major beats in Washington, including the Whitehouse, the Pentagon, Congress, and the State Department.

He has covered every presidential campaign as well as Democratic and Republican National Conventions since 1972. Schieffer has been to New Hampshire many times over the years to report on the presidential primary and he easily admits his fondness for the important role the New Hampshire Primary holds in presidential politics.

In this interview, Shieffer discusses some of the issues with the current presidential selection system as well as the current state of journalism and how it has changed since he began his career.